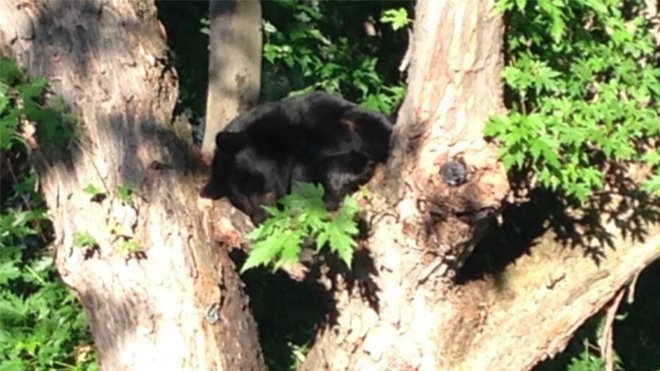 A New Sudbury resident found this bear sleeping in her backyard earlier this week. A new report released by Northern Policy Institute recommends the province reintroduce the spring bear hunt and allow U.S. hunters to participate on a trial basis. However, the report doesn’t say whether a new hunt would reduce human-bear encounters. Supplied photo.

The report, “Does the Spring Bear Hunt Make ‘Cents?’” was researched and written by Dr. Mike Commito, a policy analyst with the Northern Policy Institute.

The report recommends reintroducing the spring bear hunt because it would be a boon to many Northern Ontario communities with strong outfitting industries.

Commito writes that reintroducing the spring bear hunt could generate millions of dollars annually for the province. In 1997, a provincial mail survey found that non-resident hunters spent $25.2-million on spring and fall black bear hunting.

“History has demonstrated that non-resident bear hunting, primarily individuals from the United States, has been big business for outfitters and guides in Northern Ontario, particularly during the spring season (1937-1998),” Commito writes in the report.