Hunters in many areas of northern Ontario will have a harder time getting an adult moose tags for the upcoming moose-hunting season.

The province has announced it will reduce the adult moose tags it makes available in 2014 by about 18 per cent overall. The reductions are in response to declining moose populations in northern Ontario, which were noted by provincial biologists during this winter’s annual aerial surveys.

The largest tag reductions will occur in areas with the largest declines. In the Dryden and Thunder Bay areas, 88% fewer tags will be issued this year.

“While this is not encouraging news for moose hunters, it does present the opportunity to re-evaluate how we share in the management of the moose resource,” said John Kaplanis, executive director, Northwestern Ontario Sportsmen’s Alliance. 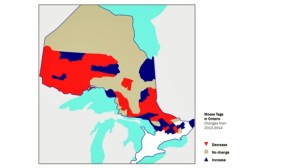 “We would like to work co-operatively with the Ministry of Natural Resources to investigate this trend and subsequently make changes to manage moose, with confidence that this declining trend can be turned around.”

Ontario’s moose population has remained relatively stable over the past decade. However, most areas of northeastern Ontario — and the more accessible parts of northwestern Ontario — have recently been showing signs of decline.