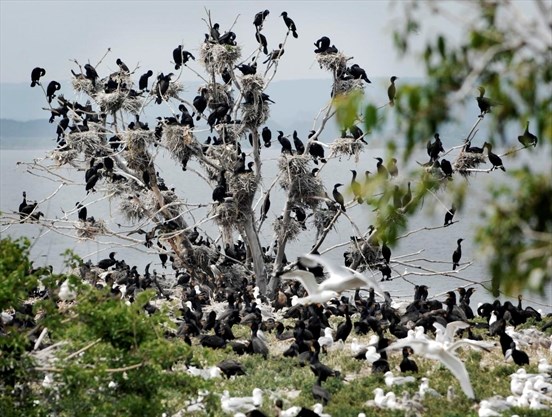 The population of double-crested cormorants has grown exponentially in the province, but unleashing hunters on them is not the way to control their numbers, says a prominent McMaster University biologist.

Jim Quinn, who has been studying cormorants and other water birds in Hamilton Harbour since the early ’90s, says “I think hunting them is a crazy idea and unnecessary because the population is stabilizing on its own.”

The provincial Ministry of Natural Resources and Forestry is proposing to list cormorants as a “game bird,” creating a hunting season to help manage the population. The move is in response to concerns from anglers, commercial fishers, and others who feel the migratory brown-black birds are consuming too many fish, pushing out other water birds and fouling nesting areas with guano.

“This is about population control. The population of cormorants has exploded since the early 1970s,” Natural Resources Minister John Yakabuski said last week. The government is looking at allowing hunters to kill up to 50 a day. A public consultation period is underway until Jan. 3 before a final decision is made by the ministry.

Quinn contends cormorants — that were almost wiped out between the 1950s and 1970s because of environmental contaminants, but rebounded since then — are “approaching or have reached a point of zero population growth.