Moose hunters victims of their own success 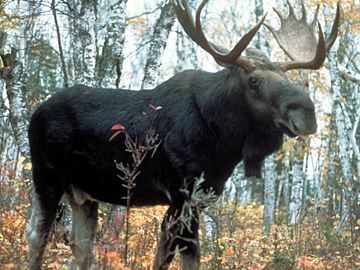 ALMAGUIN – Hunters are the victims of their own success when it comes to moose tags being handed out in one of the more popular hunting zones in the province.

Wildlife Management Unit 47 stretches north from Highway 124/Magnetawan River to the French River/Lake Nipissing and is in its second year of restricted adult moose tags with only six being allotted for this year’s hunt – three bull tags and three cow tags.

The numbers are significantly down from previous years and compared to neighbouring WMUs. In nearby units, hunters are vying for tags numbering in at least the 20s, though not as high as some areas further north for the annual fall gun hunt.

Ministry of Natural Resources and Forestry biologists say the moose numbers for the territory were down in an aerial count in 2015 of the herd.