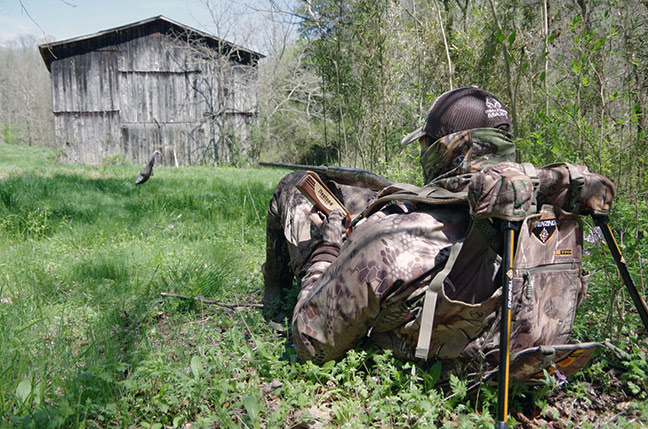 The ever-popular box call is a favorite of both beginning and experienced turkey hunters. Photo by Josh Lantz.

Want to call yourself a turkey hunter? Learn to talk the talk.

Long before the modern hunting era began, Native American hunters effectively mimicked turkey vocalizations using flutes they made from turkey wing bones. Sure, they did so to provide protein for their families, but there’s little doubt they also enjoyed it immensely. Watching a mature tom strut in from a distance while answering our captivating yelps, clucks, cutts and purrs with thunderous gobbles is one of the greatest experiences in the hunting world.

Wild turkeys are vocal year round, but particularly so during the late winter and spring breeding seasons. Much like people, turkeys are social creatures and have a variety of different voices – quiet and introverted, talkative and loud, and every attitude in between. Variations in cadence and inflection convey each bird’s personality and demeanor. The trick is to quickly ascertain what mood the birds are in and tailor your calling accordingly. Thankfully, the range of sounds these birds produce leaves some wiggle room for calling mistakes. 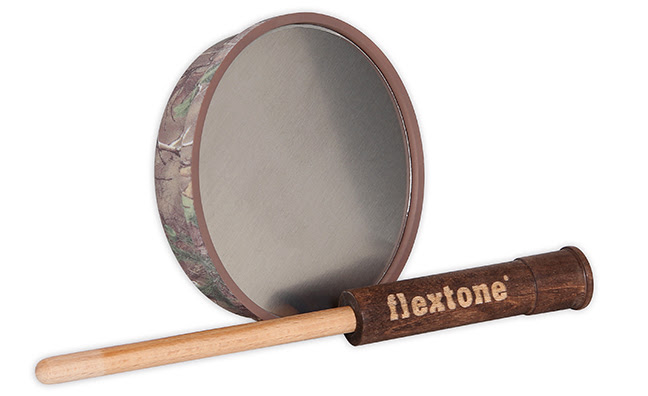 Flextone’s Tramp Stamp Aluminum Pot Call produces super loud yelps and cutts and works great on windy days or in open country where the hunter needs to reach out to birds at a longer distance. Image courtesy of www.flextonegamecalls.com

Listen to the birds

Anyone new to turkey calling can learn a lot by watching turkey hunts on television or online. Some calls are even packaged with helpful turkey calling DVDs. These videos will have new callers producing legit turkey sounds in no time, but understanding the turkey’s language will take longer.

The best way to decode turkey talk is through observation. National, state and local parks, as well as fish and wildlife areas, often have resident flocks living within refuge and safety zone boundaries that go about their daily business with little regard to nearby human activity. Go watch and listen. Observe these talkative birds early in the morning when they are most active. Of course, hunting alongside an experienced turkey hunter and caller is also extremely helpful. Unfortunately, however, this isn’t always possible.

I had no mentor the first time I hunted turkeys. I drove three hours, plopped down against a tree and started calling. Within a matter of minutes, a big tom appeared a hundred yards away, gobbling his head off. All I could do was use my box call to yelp at him repeatedly, which he answered with gusto. But he wasn’t going to finish on that call. I didn’t know how to do anything else, and I didn’t have any other calls to use anyway. He “hung-up” and eventually left. It was a slap in the face that made me realize I needed to become proficient with additional calls and sounds.

Everyone who learns to call turkeys develops their own preferences with respect to specific calls, which is why manufacturers produce such a diverse variety. Selecting the “right” turkey calls can be both confusing and expensive. Some are designed to make rudimentary sounds with ease, while others require additional time and effort to master. Some less expensive calls will produce decent clucks and yelps, but as with most things in life, you get what you pay for. Calls crafted with better materials are a good investment. They not only sound better, but also produce a more diverse range of sounds.

Many different styles of turkey calls exist, but the box call, friction/pot call, and the diaphragm/mouth call are most popular. Experienced hunters may use all three styles on a daily basis and, occasionally, two at the same time. In addition, they’ll probably carry multiple versions of each style – some loud and some soft.

Wooden box calls take the form of a hollow box body and a loosely pinned lid. The lid is rubbed or scraped along the side of the box to create cuts, purrs and yelps. Among the easiest to use, these calls will always have a place in the turkey hunter’s vest. My favorite is old, well-worn, and has been the demise of many a stud longbeard. I adjust the tension screw occasionally, but always chalk the wood for optimal sound before every hunt. Some box calls like a lot of chalk, while others run better without much at all. 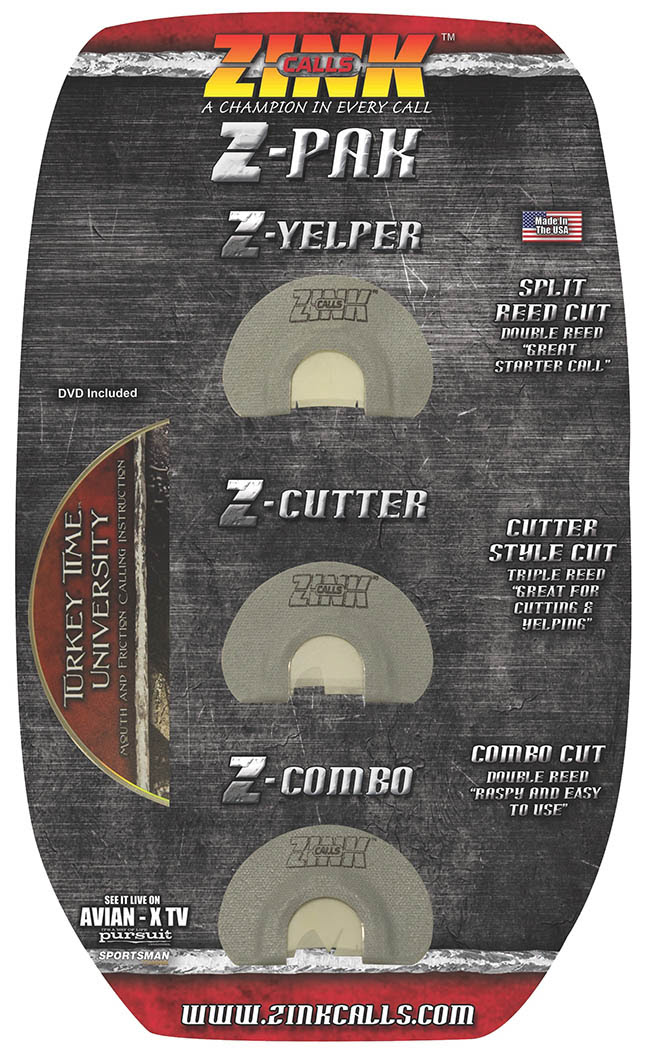 Several manufacturers sell diaphragm call multi-packs so hunters can practice on different models and learn which work better for them in different situations. Zink multi-packs come with a well-produced instructional DVD. Image courtesy of www.zinkcalls.com.

Friction/Pot calls consist of a friction surface set into a small round pot made of wood or a synthetic material designed to resonate and amplify. Sound is made when a peg known as a striker is scraped across the slate, glass or aluminum friction surface. These popular calls produce awesome yelps and great purrs. Aluminum pot calls produce louder, high-frequency sounds, which are helpful on windy days. Slate offers additional finesse at close range, while still providing good volume when needed. Glass calls typically produce a frequency between that of slate and aluminum.

Pot calls come with at least one striker made of wood, carbon or acrylic. Savvy hunters use multiple strikers to produce different sounds with one pot. I typically carry a couple pot calls and a half-dozen strikers, including a back up of my favorite in case it becomes lost or wet.

Pot calls and strikers require some conditioning. Once you hear the best sounds, you’ll know exactly how you like them to be tuned. It’s critical to rough the surface of friction calls with an appropriate abrasive (usually included with the call). A long, drawn-out calling situation may even require that these calls be given a little mid-hunt TLC.  And don’t neglect using an abrasive on the tip of your striker, which can become glazed from use. Zink friction calls come with a handy “conditioning pocket” built right into the back of the pot.

Like turkeys, each call has its own personality. This is especially true with diaphragm calls. These calls are held in the roof of the hunter’s mouth and, with practice, can duplicate the widest variety of hen turkey vocalizations. They all may look similar at first glance, but diaphragm calls use different numbers of latex or prophylactic reeds cut in a variety of patterns to produce different levels of frequency, volume and rasp.

I find two or three diaphragms each year that get me through the season because they have that little extra something. Some just seem to work better than others. And most sound better after they’ve been broken in, so be sure to practice with them often prior to hunting. A great time to do this is while alone in the truck or at home in your favorite chair.

Mouth calls eventually wear out, but you can delay the inevitable by storing them properly. Keep them clean and let them air out a little before storage. Occasionally, I’ll dip mine in water-diluted mouthwash to freshen them up a bit.

Turkey calling is inextricably attached to turkey hunting and shouldn’t be ignored. With all the great call options available today, hunters should have no problem finding a few that fit their needs. The old saying, practice makes perfect, rings as clear and true as a fly-down cackle on a still spring morning. So find your go-to calls and get after it.  You’ll be talking turkey in no time. 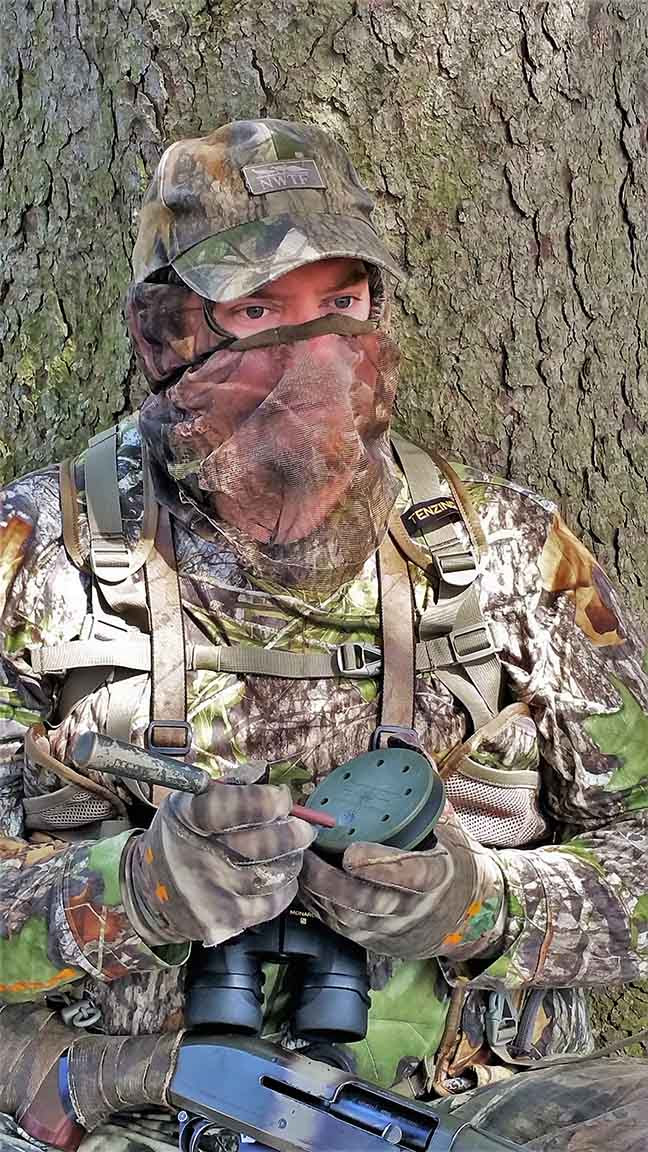 It’s sometimes necessary to condition a call surface or a striker during the hunt, and the conditioning pocket on Zink’s Wicked, Power Hen and Thunder Ridge pot calls is perfectly suited to mid-hunt tweaks. Here, the author puts new life into a battle worn Zink striker while working a late-season gobbler. Photo by Angie Anglin.