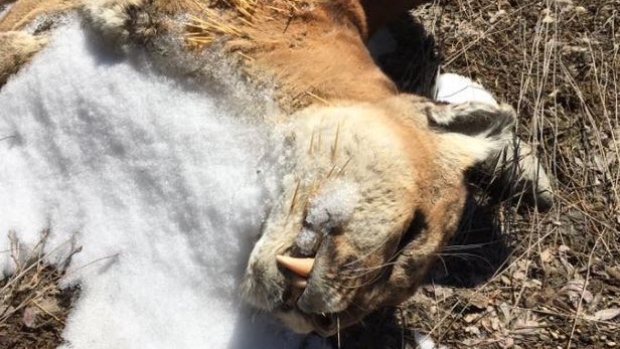 This cougar was found frozen in a snowbank on Boreal Road near Thunder Bay Saturday. (Mandi Weist)

A startling discovery made this weekend north west of Thunder Bay may have answered a decades-old question about whether cougars prowl northwestern Ontario.

On Saturday Mandi Weist, her boyfriend, and some buddies were exploring a sand pit area near the Boreal Road when they came upon a van that was pulled over.

They asked the people in the van if they were OK, and they answered, “yes, but we are just looking at the mountain lion.”

Weist said the group then parked their jeep to have a look.

They could see it was indeed a cougar, partially frozen into a snowbank, she said.

Weist said they were shocked to see the huge cat.

“Honestly, we had driven by this spot before and had seen something laying there. We just figured it was a deer, based on the colour,” she said.

Knowing it was an extremely rare find, the group loaded the dead cougar onto the vehicle and brought it into Thunder Bay.

Weist said they knew they had to contact the Ontario Ministry of Natural Resources and Forestry (OMNRF) about their find.

She said they also talked to taxidermist Dan Cavicchiolo and decided to bring the cat to Boreal Tales Taxidermy on Hwy 61, south west of Thunder Bay.

Cavicchiolo confirmed to the CBC that the animal brought in was indeed a mountain lion.

“It definitely is a cougar, full grown male cougar, ” he said. “I’m hoping to be able to do some kind of a mount here … it’s been dead for a bit.” 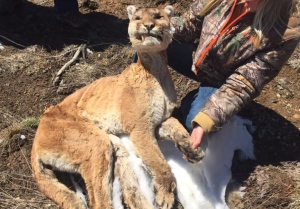 Cavicchiolo said the front half of the cougar that had been frozen in the snow seemed to be well preserved. He said the back half of it had more decomposition.

The animal had long claws and good teeth, but was emaciated and had muscle atrophy, he said.

“It was in really bad shape when I skinned it. Very thin,” he said. “It weighed about 80 pounds, but it was all skin and bones. It seems like it died of natural causes.”

Cavicchiolo noted that he removed between 50 and 75 porcupine quills from the cougar’s shoulder and nose, but he said there were none in the cat’s mouth.

He suspects the animal “tied into a porcupine” when it was getting desperate for food.

Cavicchiolo said he wasn’t always, but is now convinced that some cougars call northwest Ontario home.

“Dealing with a lot of hunters and fishermen, I’ve heard a lot of stories,” said Cavicchiolo. “And I’ve never seen one myself, and I have to admit, I’ve always been a little skeptical.”

According to the OMNRF website, cougars are considered an endangered species in Ontario.

Weist said that, on Sunday afternoon they took a ministry conservation officer to the spot where she and her friends had found the cougar. 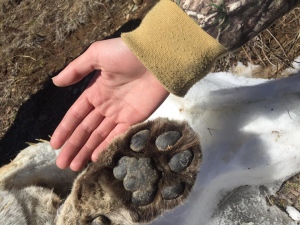 Mandi Weist compares her hand to the paw of the dead cougar she and others found. (photo credit: Mandi Weist)

“[The CO] told us we can’t actually keep it because it is actually illegal to own a mountain lion from Ontario, because they are an endangered species,” she said.

Weist said she was told the animal would be mounted and displayed for educational purposes.

“They said it was the very first confirmed mountain lion carcass in Ontario,” said Weist. “It’s pretty neat. It is a special find.”

The ministry website notes that “cougars are most likely believed to live in northern Ontario because of the remoteness of the habitat. However, there have been many reports from the southern part of the province.”