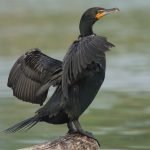 Local naturalists are asking that hunters planning to take part in this fall’s cormorant hunt stay away from a pair of island nature reserves.

The Land Conservancy for Kingston, Frontenac, Lennox and Addington owns Snake Island and Salmon Island and maintains them as nature reserves.

The group issued a statement Friday morning reminding people that the islands are off limits to hunters.

“We were given Snake and Salmon islands by Robert Carson and Dr. James Day in 2012 to preserve them as places for nature,” Land Conservancy director Christine Cannon said. “They are private property, marked with the standard no trespassing symbol, and are important nesting places for many species of birds.

“We are hoping that hunters respect that Snake and Salmon islands are set aside for nature and are not areas where hunting is allowed.”

Earlier this year, the provincial Ministry of Natural Resources and Forestry approved a three-month cormorant hunt, from Sept. 15 to the end of the year. Hunters are to be permitted to kill 15 double-breasted cormorants a day.