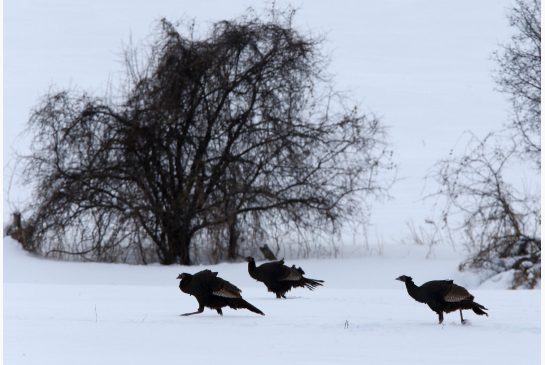 Ontario’s wild turkeys, sometimes seen feeding on farmers’ fields or gracing dinner tables, are on the trot thanks to climate change.

Although hunted to extinction in this province more than 100 years ago, the birds were reintroduced in 1984 and flourished in the forests and fields of Southern Ontario, even venturing into urban areas.

But since those early days, global warming has made conditions more favourable for them further north. They can now be found as far away as the Sault Ste. Marie, Sudbury and North Bay areas.

Wildlife officials are trying to keep it that way by carefully managing the population, now estimated at around 70,000, through spring and fall hunts and keeping close watch on weather conditions including cold and snow depth, which limits their access to food.

“They’ve proven to be far more adaptable than we gave them credit for,” said Patrick Hubert, a senior avian biologist with the Ministry of Natural Resources and Forestry in Peterborough.

“They continue to push northward. It’s fascinating. They seem to find a way to make a living.”

For a species with a relatively short life expectancy and a high mortality rate for chicks, the key is to carefully monitor the spring hatching season.

Early warm spells can encourage hens to lay eggs too soon, leaving the baby birds at the mercy of life-threatening later cold spells later in the spring — such as last May when temperatures dipped close to zero or below in parts of Southern Ontario. There is also the risk of spring flooding for nests.

“Even one harsh winter can really knock them back, too,” added Hubert, noting that concern is magnified in Northern Ontario where turkeys are gaining a bigger foothold.

Hunting and conservation groups are thrilled to see the population expanding northward, where the turkeys tend to grow larger than in the south.

“We’re very excited,” said Steve Nicholson of the Canadian Wild Turkey Federation, who added it’s not unusual to see flocks of 60 to 100 birds in farm fields or meadows.

For hunters, that sounds like shooting fish in a barrel, but it’s not necessarily that easy.

“They’re easier to hunt than some of the big game like deer, but they have very keen eyesight and sense of hearing,” Nicholson said. “You can snap your fingers and they’re gone.”

That means wearing head-to-toe camouflage and being careful, using calls or blinds and being patient until birds come within shotgun or arrow range for bow hunters.

“They’re quite tasty,” said Nicholson. “You don’t get more free-range than that.”

He describes the breast meat as “a slight bit darker than a supermarket bird but still white meat and very close in flavour to a regular turkey. The leg meat is darker and stronger tasting.”

“Some people will roast them whole or deep fry the whole turkey. It’s pretty much anything you do with a regular turkey,” he added, although some back country chefs put bacon on the breasts to keep them moist through cooking.

But while climate change is benefitting the birds in Ontario, in the southern United States, wildlife officials worry that hotter temperatures and humidity and precipitation will make conditions less habitable for the birds, bringing parasites and disease.

The Audubon Society, for example, has warned wild turkeys, bald eagles, ospreys, brown pelicans, mallards and white-breasted nuthatches are among 314 species that could lose half their current range by the year 2080.

“They face a lot more challenges from diseases and parasites in a warmer and more humid environment,” said Hubert.

“If they have a harsh winter and a warm, humid summer, turkeys can periodically face the worst of both.”

Hunting: For the spring hunt, there is a limit of two birds per licensed hunter. In the fall, the limit drops to one.

Nests: Turkey hens lay 10 to 12 eggs in their first clutch.

Range: The birds are found throughout Southern Ontario and as far north as Sudbury and North Bay.